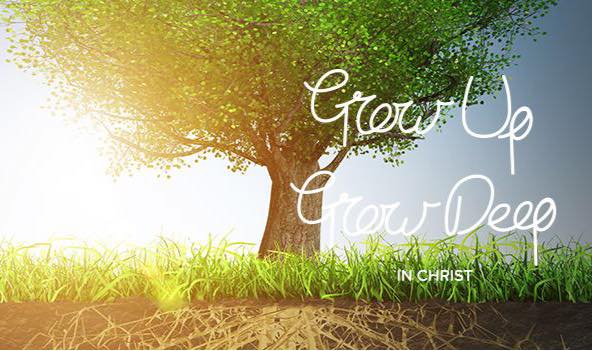 Ephesians 4:15 “But speaking the truth in love, we are to grow up in all aspects into HIM WHO is the Head, even CHRIST…”

Within a collection of tree souls, a young lad nurtured the soil. This seedling expanse was a grove of newborns…who from this mature oak had “near” fallen. Replanting them deeper around it, so the boy placed them neatly — aligned. Each week he would watch and rewater their space…whilst removing the weeds which had grown.

So month after month there he labored, till older he also was growing. Yet though he stood taller, these seedlings had not. Thus Confusion grew greatest of all. Then he gazed at the towering Oak as its shadow hid each acorn’s face. Most seedlings remained though some a tad larger…till GOD’s Light reached the young man again.

“These offspring before you yet youthful have stayed in one place, never stretching. For one tree drank most of the water and sunlight. Thus these others — though here— never flourished. “See MY birds in this tree, up above?

The strength in their wings comes by leaving. Sometimes with a push and sometimes on their own. So your calling, MY son, is to MOVE them. The youth pastor then kneeling quickly began transplanting seedlings abroad. Gathering acorns without any depth, so too were they moved…out into open.

Soon CHRIST’s water and Light’s FULL refreshing embraced the Lost trees bringing Meaning. Soon seen were great numbers now growing with Zeal until the birds made their nests in them too.

Thus the man and his trees did mature till a forest of souls surely flourished. Well grounded, providing both refuge and food so the Lost became Found…by Life’s seedlings!

Devotional: Hebrews 6:1-3 “Therefore leaving the elementary teaching about the CHRIST, let us press on to maturity, not laying again a foundation of repentance from dead works and of faith toward GOD…”

Press on in Maturity! Having a deeper walk with CHRIST strengthens our wings and frames for the paths ahead! GOD gave me a personal writing years ago which encourages my steps in life. “It is the depth of HIS footprints which restrain us from slipping!”

So we deepen our knowledge to stand strong in the storms!

Colossians 1:9-10 “For this reason also, since the day we heard of it, we have not ceased to pray for you and to ask that you may be filled with the knowledge of HIS will in all spiritual wisdom and understanding,”

Growth isn’t easy. Like muscles tearing and repairing to become stronger, there is discomfort and pains to be experienced as we grow from seedling to sapling to young tree to maturing.

Hebrews 5:14 “But solid food is for the mature, who because of practice have their senses trained to discern good and evil. So the milk of the WORD is good, especially for newborn seeds in CHRIST. Yet we cannot remain on liquid so 2 Peter 3:18 reminds us all.

“But grow in the grace and knowledge of our LORD and SAVIOUR JESUS CHRIST. To HIM be glory both now and forever! Amen.”

Philippians 1:9-11 “And this I pray, that your love may abound still more and more in real knowledge and all discernment. Let your love abound unto many, feeding them with your growth and knowledge of JESUS. Not boastful, not proud, not condescending but humbly and broken…with Compassion.

Ephesians 4:14 “As a result, we are no longer to be children, tossed here and there by waves and carried about by every wind of doctrine, by the trickery of men, by craftiness in deceitful scheming…”

Back to words The Holy SPIRIT inspired me write. “It is the depth of HIS footprints which restrain us from slipping!” Without PERSONAL and GROWING depth in HIS WORD, we are prone to have our small root structure ripped out in the harsh storms of Life.

There are countless people who can preach Error charismatically and without depth to compare what they’re saying to GOD’s truths…souls get “swept away” again and again. So we must watch, learn and pray with all diligence.

Here once more we read the WORD instructing is to increase knowledge of CHRIST and HIS WORD so that we may be mature in HIM. Romans 15:1 “Now we who are strong ought to bear the weaknesses of those without strength and not just please ourselves.”

Many young seeds and saplings are weak and immediately placing them out in the world lacks Wisdom and Maturity. But when the parent knew the baby bird was far enough along in their growth, they encouraged them out of the nest. Else, countless souls would never attempt to fly…let alone soar free in CHRIST.

Philippians 3:13-15 “Brethren, I do not regard myself as having laid hold of it yet; but one thing I do: forgetting what lies behind and reaching forward to what lies ahead…”

Stretch ahead both in and with JESUS! Forget the winds of the past, move past the comforts and ease of just drinking the basics of the Bible. Yea, press on!  1 Peter 4:10 “As each has received a gift, employ it in serving one another, as good managers of the grace of GOD in its various forms.”

Therefore! Grow, Beloved! Zealously provide your gifts for growth and life for others…to follow in the depths of HIS footprints!